The title comes from the fact that one of my sister’s and myself are both gay. Between that and the fact our shared dad has been married 3 times, my mom has been married 3 times, and we each have a whole bunch of siblings all related through marriages and halfsies, and then throwing the Ray story into the mix, we thought our family had laid out all our laundry for the world to see already. Surprise! That’s never the case.

Here we are a year after “the Ray story”, and my wife and I have made it through the first trimester and it’s Easter and we are starting to tell our family. We tell my dad and he is thrilled and cried and so happy and asks for details about who is carrying/donors etc. We tell him that my wife is carrying my egg and we used the same donor that Jen used to conceive her first son. Later that day, my dad pulls me aside and asks if I knew how I’d been conceived. Now, my mom had always told me that she had fertility problems and I was a test tube baby and they had conceived me at a facility in Berkeley. That had always been no big deal to me. So when my dad asked that question I responded with sure and the former information. He breathed a sigh of relief and said oh good I didn’t know she had ever told you and now that you’re having a baby I thought you should know and he cried a bit and hugged me and I thought “this is odd…” and then he finished out our hug with a “you’ll always be my daughter.” Uhhh…huh? Come again? Just because I was mixed in a tube doesn’t mean I’d never think of you as not my dad…

I didn’t say any of that I just awkwardly walked away. I asked my wife if she thought that he meant he isn’t my bio dad and she said no way he’s totally your bio dad. So I basically just let it go.

Fast forward to a couple weeks later when we tell my mom over video chat that we are pregnant. I then tell her about the awkward convo with my dad and laugh and joke, “but he is my bio dad, right?” and my mom looked scared and slowly shook her head no and said this wasn’t how she ever wanted to tell me and explained that my dad had a vasectomy after he had my sisters with his first marriage (a decade before I was born) and that when they tried to get pregnant they couldn’t get a sample from him because he was completely infertile. But they wanted a child so badly, they went with a donor and all they knew was that he was maybe a medical student at UC Berkeley. WTF.

Not WTF in a bad way, but just a total shock, totally confusing emotional roller coaster. Here I am, 27 years old, about to have a child from my genes, and I was just informed that the man I thought my genes came from, doesn’t actually share any DNA with me. Neither do my two half-sisters, and now I know nothing about half the genes of myself, or my baby. A WTF moment for my wife too because now she’s looking at her belly like “helloooo in there, who are you??”

So, I have an engineering, logical brain, and my reaction isn’t “omg I want to find my real daddy!!” My reaction is: I have a wonderful dad whom I love very much and will always be my “real dad” and I also have 2 amazing step-dads on top of that. I don’t need another “dad.” What I am curious about is, though, what is the medical history of this person, of my baby? Where did my nose come from? Wait…AM I EVEN POLISH?!?! It was quite the identity crisis for a few days, and maybe still is a little bit.

I decided to submit my DNA to Ancestry DNA. Now here is when shit really hits the fan and gets crazy.

I matched with several cousins, whom I didn’t recognize, and whose names my mom didn’t recognize either. Out of curiosity I started messaging them all saying that I had just learned that I was the offspring of a donor and that I wasn’t sure if we were related through my mom or the donor and if they’d be willing to share some family history together.

One responded. Enter wonderful cousin, Brittany! Brittany was stoked because we’re around the same age and she doesn’t have any cousins her age. She recognized that we are related through her dad and told me that was cool because there are famous people on that side. We exchanged long e-mails of family history including all close relatives, their ages, and some general info (she was SO thorough it was awesome). Then began the detective work. It was fun the two of us working together to piece together my family lines. We knew for sure that Don DeFore (yes the famous Don DeFore who has a Hollywood Star and owned a restaurant at Disneyland) was either my grandfather or great grandfather. She thought at first it might be her uncle, but we realized the age didn’t fit. She then began sending family photos and we remarked at how crazy similar I looked to her aunt Penny. I looked back to her family tree e-mail and realized that Penny had a son and the age might fit. I asked Brittany if she thought it might be him and within minutes she had confirmed with his sister that he had in fact donated sperm and lived in Berkeley the year I was conceived. All of a sudden, within a matter of hours, I had not only found my donor, but had my whole family history mapped out. It was a very odd feeling. It was exciting, but also a little scary because I had never intended to actually connect with my donor’s family, I just wanted to KNOW things. I don’t want to mess up whatever plan the donor had with anonymity. I’ve talked to Brittany’s dad through e-mails where we have shared photos and stories. I know that other members of the family now know about my existence, but I have told Brittany and her dad that I would love to connect with them but I won’t reach out first so I don’t step on any toes.

We know that my donor donated a lot, so I may have many siblings out there! I hope I can find some of them because I think it would be so cool to see if we look similar, have any similar traits, swap medical histories, etc. I know I have a possible match on Ancestry that is likely a half-brother, but he hasn’t responded to any messages….Nicholas Cross, if you’re out there, let’s chat, it doesn’t have to be anything more than that!

So there you go, that’s most the craziness of my family….what secrets are hiding in your family chamber?

Photo info: me and little half-brother on left, donor and sister on right.

2 thoughts on “I Thought We Were All Out of the Closet Already..” 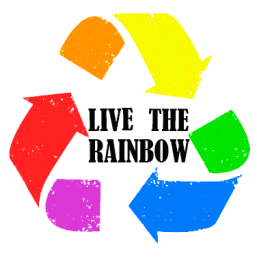 We live in a world full of intolerance, overproduction, waste, and destruction. How can we live better? How can we travel better and safely? What can we do to improve our planet? As two wives trying to raise a family, we ask ourselves this everyday. Please enjoy our blog and join us on this journey toward sustainable living in an LGBTQ loving world.